I love this dress, it’s called Anna and is one of 2 100% donation items from JANE. The belt and skirt are 2 parts so it is easy to adjust to your shape, and if you are really curvy and have a big behind, it comes with an alpha mask to hide it! The top has a sweet crochet effect, which is very “in” this season, and it’s pink – my fave color, so it’s going into be in heavy rotation. You might also notice my neat pose, it’s from BENT! and it is one of their donation poses which they will have for the event. This one is called “Soft winds above” and so of fits in with my dress and overall look.

The MINA brands both have offerings for this event as well, and here is a closer look at them. MINA Hair has a pack of hair called “Saartje Redpack-Lighttips RFL 2011” which includes 5 shades of red hair, each with lightened tips. I’m wearing the Rose shade because it seemed to match well with my dress. MINA Bijoux has this earring and necklace set which I am wearing, called Pearl – RFL 2011. I like the tassel accents, which make it more unique than your standard pearl jewelry. Both, of course, are 100% donation items.

If you’d like to learn more about the GLANCE Front Row event, you can check out their website: http://frontrow.glance-international.com/ 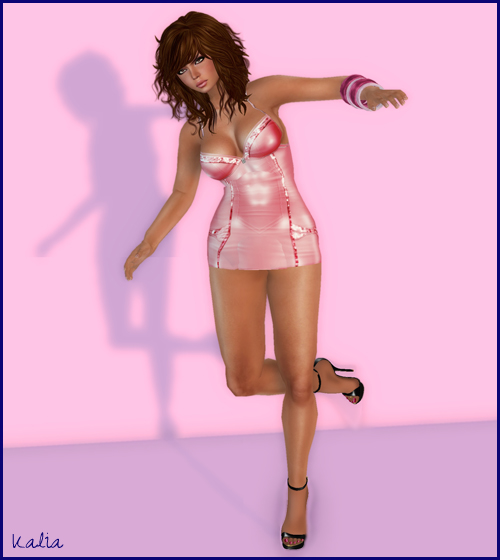 You might have heard about the upcoming event called “GLANCE Front Row” but not know much about it. From April 1, 2011 at 12PM SLT until April 30, 2011 at 12PM SLT, GLANCE International Agency will be producing a grid-wide event where 50 of Second Life’s creative designers will showcase their work in different fields: fashion, shapes, skins poses, and accessories. The goal is to raise money for the Relay For Life with exclusive items.

I am wearing a dress and shape that will be part of the event, as well as using one of the available poses.

I don’t normally wear shapes other than my own, but Savoir Faire Shapes has lovely, realistic shapes and this one called Neva called to me. It has curves in all the right places and the face is so cute! The dress is by Son!a; and comes in both a lavender and pink version (includes a pair of black pantyhose with each). Everyone knows I love pink, so of course I had to wear that one. I feel ready for a night out on the town in it – gonna hit up some clubs and fist pump until the AM! I used one of the poses from BENT! which are available for the event, and this was the first time I had used one of their poses. All of them have fun names and aren’t your typical photo poses at all. 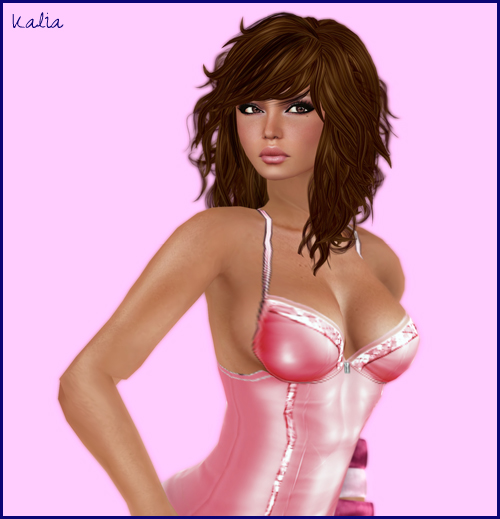 Here’s a closer look at the face on the Neva shape, and at some of the details on the dress. Wow I haven’t been this busty in a while…makes me want to shake them around!

If you’d like to learn more about the GLANCE Front Row event, you can check out their website: http://frontrow.glance-international.com/

This week I decided to pull out something rather cute for the blogger’s challenge of 52 Weeks of Color. White is a color I have tons of items in, but then you’ve probably seen so many white shirts, dresses and so on that it all starts to look the same. So, here I am in a cutesy avatar I picked up a couple of years ago from the Creators Stamp Rally 2009 (this year’s version, Choice!2011 will be coming up soon, so keep an eye open for that).  I feel so sweet and innocent in this, maybe I’ll keep it on for a while…

It’s week 20 of the 52 Weeks of Color blogger’s challenge – and the color of choice is sky blue. I guess sky blue can be different for people depending on what part of the world you live in, what the weather is like, and blah, blah, blah. So here I used a couple shades of sky blue if you will, and was really happy with the end product. 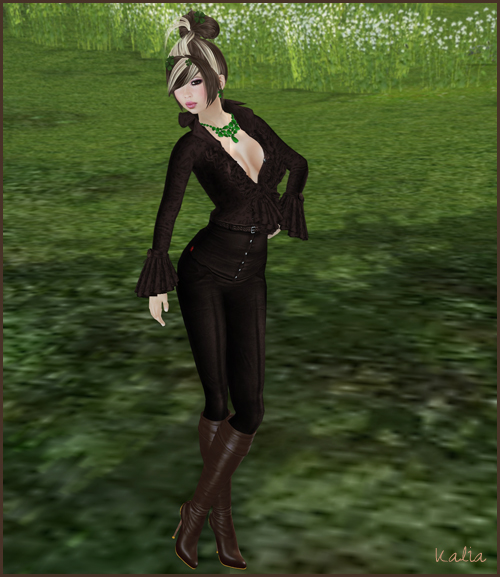 I’ve got a late entry into this week’s color for the blogger’s challenge of 52 Weeks Of Color…umber! It’s pretty much just like any shade of brown in my eyes, but I guess we all have our own names for things. I’ve had a bit of a headache with my photos, took forever and then I had a wardrobe malfunction, and then more pictures….well here it is.  A short post today, but check out the credits if you like what you see.

The Pacific Crises Fundraiser opened today and will run until April 10, 2011. I already showed you a look using several items available, and now I have another one for you!

I picked up the rose colored dress from *PeOi*, although you can get it in blue or yellow too, as well as the pack of all 3. I thought the GOS Posh Booties would match well, and this pink shade is exclusive to the PCF event so I had to have them! I saw the sweetest HOPE necklace from Statique. and knew I had to have it, being that it was feminine and girly it suited my look. I topped it off once again with the Sakura hair from Exile, the pretty little flowers make me so happy!

All the donations from the PCF will go to AmeriCares (http://www.americares.org/) and you don’t need to buy any items, there are donation boxes if you prefer to do that.

The Pacific Crises Fundraiser begins tomorrow, March 16, 2011 and will run until April 10, 2011. It’s goal is to raise money for those affected by the recent earthquake in Japan and the tsunamis that followed in the region. Over 200 designers have offered an item or more, many giving 100% of profits to the charity AmeriCares (http://www.americares.org)

I put together my look from different items that will be available. My Hair is from Exile, called Sakura and it comes in a pack of 4 colors. The flowers in the hair are color change or can be turned off. The top is from a store called justB and it is my first item from them – it is a special recolor of this top for the event. My shorts are from DCNY and are actually sold with a matching vest and a crimson tank top, but I like pulling apart outfits and using the pieces separately. Last, but not least, my bracelet is an item from je suis… I love a stacked bangle.

The event is huge, there are so many creations to see and I will be posting more. Hopefully you will be able to visit and find something you like, if not, there are donation boxes located at the landing point as well so you can always drop some Linden dollars into it. 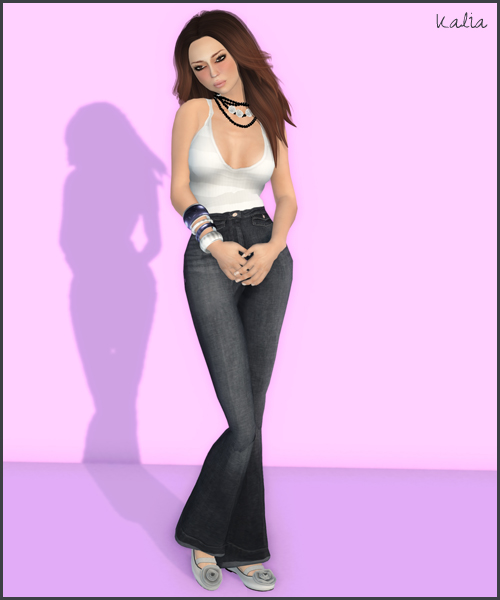 Have you been to visit the Fashion For Life sims yet? There’s a lot to see, so take your time, the event runs until March 22, 2011.

This look easily came together because FAB.PONY is offering the tank-top and jeans together as a donation item. I have to say, these high-waisted jeans are so 70’s and are pretty much perfect in my eyes! The prims for the jeans come in a version for flat shoes (worn) and for heels. There is so much to see at the FAB.PONY booth, so drop by now!

Both my necklace and shoes are by Duh! I’m giving you a better shot of the necklace here, the real astounding thing about all Duh! donation items is the price – they’re all under L$ 40, if I remember correctly. There are several items to pick from, and since they are all so low in price you can get more than one! The necklace and the shoes are scripted to resize so that they can easily fit anyone. Vist the Duh! booth soon and have a look!

To see all the latest news on the Fashion For Life fair (and to get a map), be sure to check out the website: http://fashionforlifesl.com/

The Fashion For Life fair is now open! I hope all of you get to visit the 9 sims, each was designed by someone different and they all have a different feel, even though they all use only black and white in the builds. The theme for the fair this year is “Beyond Black and White” so many of the designers have items in black and white.

My vest is a good example, it comes in this special recolor for FFL. It’s by Malt and you can drop by the booth now to get it or the other donation items. It comes with clothing layers to wear underneath as well as an alpha to hide your chest and shoulder blades. I tinkered for just a minute or two to get the vest to fit perfectly and I love the look! If I didn’t have a million other things to blog, I’d keep this on for a week.

My shoes are also a donation item and they are by Elikatira. They are especially a good value because you get 2 pairs, the near black (which I am wearing) and in powder, which is an off-white. The shoes come in both viewer 1.0 and 2.0 versions. Stop by the massive booth and have a look, there are also white boots, and 2 hairstyles which are donation items.

To see all the latest news on the Fashion For Life fair (and to get a map), be sure to check out the website: http://fashionforlifesl.com/

I’ve got 2 more items to show you before the Fashion For Life event officially opens tomorrow March 12, 2011. The event covers 9 sims so there is so much to see, and in this case the items were meant to be paired together and they compliment each other wonderfully.

The gown is by Nicky Ree and is called the Tricia Lace Gowns in Pinks, it comes with 6 prim pieces which make up 3 styles of skirt. I wore the big ballroom option, but there is a less poofy version and then a 4-piece option that gives you a mermaid style with a long train. I feel like a shimmering, glimmering, princess in this gown – and the pink is so me! There are 3 other donation items at Nicky Ree, so even if this isn’t your thing, stop by the booth at the fair as of tomorrow!

My earrings and necklace are both by Alienbear Designs and are part of 3 items for the FFL fair, a line called Queen Margaret (the third item is a matching ring). All the items are sold separately so you can get what suits you best. I also liked that the necklace is in two parts, with the chain and main pendant as one piece, and the 4 smaller pendants as another. It makes it more versatile for styling or if you want to wear fewer prims. Check out the amazing prim work at the Alienbear Designs booth as of tomorrow!

For up-to-date info about Fashion For Life check out the website: http://fashionforlifesl.com/